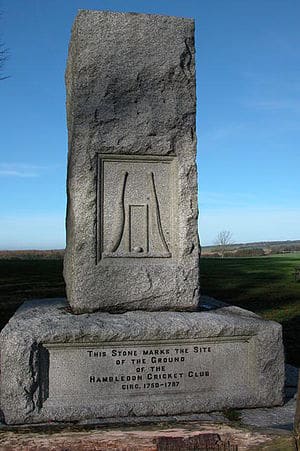 The History of Cricket in 60 Seconds

A Brief History of Cricket

The game of cricket has developed radically over a long and fascinating history. Set against its humble 14th century origins amongst the sheep farming community of southern England, the sport now bears little resemblance to its early derivations.  Upon the establishment of the Hambledon Cricket Club in c. 1750, the game firmly embedded itself into English society and has gone on to establish a long and illustrious national tradition.

The formation of the Marylebone Cricket Club (MCC) in 1787 marked a shift in control of the sport, as power was assumed by the club, and the governing body at Hambledon was transferred to the MCC’s headquarters at Lord’s.

This movement of authority to the capital advanced the rise of elitist cricket, and by the late 18th century the acrimonious split between ‘gentlemen’ and players had been firmly established. Cricket emerged as a pastime of the aristocracy, and a symbol of the leisurely lives of the ruling classes, with clubs such as White Conduit in London restricting their membership exclusively to gentlemen. This elitist philosophy was also driven into schools and universities, as cricket became the stalwart sport at Eton, Oxford and Cambridge. Thought to typify the values of the English Gentleman, cricket functioned as much as a sport as a lesson in social refinement and morality, and was seen as something of a rite of passage into the society of the ruling elite.

Cricket as a social educator was not a concept confined to England, as British colonial powers exported its Anglican, ‘civilising’ principles to South Africa, the Caribbean and India during the reign of the Empire. Around the world, cricket retained its elitist philosophy with cricket clubs in India being opened only to European settlers. Australia marked the exception to this rule; its cricketing authorities made no distinction between amateur and professional players, a principle that took until 1963 to assert itself on the game in England and dispel any lingering illusions of exclusivity.

The history of cricket has not been without controversy. During the 19th century, tensions over the development of over arm and ‘aggressive’ bowling shaped the evolution of the game and redefined its rules. Today, the future of Test Match cricket seems increasingly uncertain, as the game is put under mounting pressure by the rise of Twenty20. Coupled with this are concerns that the Indian Premier League, established in 2008, could compromise the quality of international cricket if players ignore their obligations to their national teams (to maximise their potential earnings) and detract the attention of young impressionable players away from mastering the core cricket batting fundamentals. The credibility of the sport has also been rocked by allegations of match fixing; the banning of Pakistani players for bowling deliberate no balls in a game against England at Lord’s in 2010 being one of the most publicised results of the claims.

Yet interest in the game has never come under question, and cricket still stands as the second most popular sport in the world, despite only being played formally in 13 countries. From its early manifestation as a symbol of English culture and civility, the game has grown into a worldwide sporting and cultural phenomenon.

Cricketers: Do You Have The Mind of a Winner? :: Learn How to Play Cricket | Cricket Tips | Cricket Batting Tips & Cricket Bowling Tips