Home > Cricket Tips > The History of Indian Cricket :: Learn How to Play Cricket 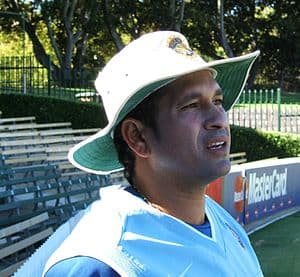 The History of Indian Cricket

Sachan Tendulkar – The Greatest Indian Cricketer Ever? (Image via Wikipedia)

A Brief History of Indian Cricket

It is no exaggeration to say that cricket in India today bears almost no recognition to its early forms. Introduced to the country by the British Army in 1721, it took its roots in small unorganised matches between the natives and colonisers. Until 1792, when the Calcutta Club was founded, cricket was not played formally in India and even then participation in the sport was restricted to Europeans. It was five years later that Indians began to play the sport in Bombay, laying the foundations of a tradition that would come to dominate sport in the country.

India had to wait until 1878 to play its first international match when a team travelled to England to take on their national side. England reciprocated in 1889, visiting India to play a series of matches in which they were defeated only once; by India’s single non-European team. The split between European and native players in India embedded itself into the sport, encouraged by the prestigious Presidency Matches which pitted European settlers against native Parsee sides until 1952.

Perhaps surprisingly for a side that currently hold the Cricket World Cup, the Indian team only gained test status in 1952 and achieved their first victory two years later in 1954. The growth of the game continued, and its status as India’s national sport was reinforced when, in 1897, India became the first nation outside England to host the World Cup. India went on to win the tournament in 1983 (and subsequently in 2011), their victory marking the 200th anniversary of organised cricket in the country.

India boasts a strong legacy of prolific players, including Sunil Gavaskar who holds the record for most centuries in Test cricket and Sachan Tendulkar, recently described as ‘the greatest Test player of all time’ by Andrew Strauss. Tendulkar, alongside three other India players Gavaskar, Kapil Dev and Virender Sehwag, received further recognition after being named in the ICC Greatest All Time Test XI this year.

Today, India plays host to the Indian Premier League, a tournament that is fast becoming the most popular and engaging in the sport. The thrill of the 20 over format has proven an enormous draw for players and spectators alike, marking a new dawn in cricketing history and a move away from the 50 over test match set up. The competition has attracted the undisputed greats of the game, amongst them Shane Warne, David Hussey and Mahela Jayawardene, all of whom are bound by multi million pound contracts. Certainly the IPL’s wealth surpasses that of any other competition in the sport; the tournament offers prize money of $2 million and attracts sponsorship in excess of $50 million.

Despite the undeniable success of the league, debate is rife over whether its economic and entertainment benefits outweigh the threat that it poses to the tradition of International Test Cricket. It remains to be seen whether the two games can co-exist effectively or if the recent innovation will come to dominate the sport. Whatever the outcome, it is true to say that India stands as the current pioneer of cricketing initiative and is set to continue its dominant status at the forefront of the game.