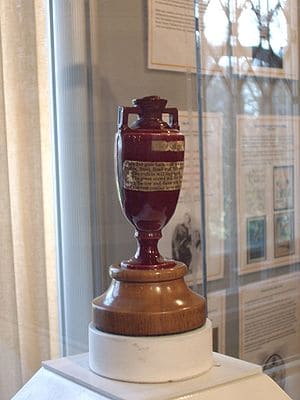 A Short History of Ashes Cricket

The Ashes tournament celebrates one of cricket’s most intense and time-honoured rivalries. From its inception in 1882, the sport’s most distinguished test competition has pitted the nations of England and Australia against one another. Held biannually, the Ashes are hosted by each country on an alternating basis and have generally comprised of a series of five test matches (although there have been occasions on which six matches have made up a series). Whilst victory ensures that the coveted trophy is awarded to the winning team, a draw allows the Ashes holders to retain the title.

Derived from a headline in the Sporting Times heralding England’s defeat to Australia in 1882, the name of the contest has endured the tournament’s 150 year history and has come to symbolise the fervour with which the competition is fought. The original trophy, a small terracotta urn, is said to contain the remnants of the bails from the first series and is currently held in the MCC Museum at Lord��s. This historical prize was presented to the winning team until 1990 when the MCC commissioned the urn shaped Waterford Crystal Trophy that is awarded today.

The overall series score line of 31-30 (as of 2011) in favour of Australia is indicative of the tournament’s quality and the close rivalry that exists between the two teams. The Ashes has been graced by many of the sport’s finest players, amongst them Don Bradman who holds the record of 5028 for the most runs scored, and Shane Warne, an undisputed great of the game. The latter is often heralded as the most prolific Ashes player, having played in 36 matches, scored 946 runs, 195 wickets and made 30 catches in his competition career.

Support for the Ashes has remained strong since its inauguration and the 2007 crowd figures of 813,316 speak volumes for its continued popularity. In fact, the great rivalry between England and Australia induced by the Ashes has not confined itself to the sport of cricket and has encouraged the institution of other sporting tournaments between the two nations such as rugby league, a hugely popular event in itself.

Despite the enduring interest in the competition, a move by the BBC in 1998 which relegated the sport to B Status and negated their obligation to provide live coverage of the Ashes, sparked concern for the future of the contest. Certainly, television viewing figures have declined since Sky gained the rights to the Ashes. Interest renewed however in 2005, when Channel 4 broadcast live coverage of England’s victory over Australia and attendance at the grounds has remained at consistent levels.

The future of the competition remains positive with an unprecedented 10 back to back test matches scheduled for the 2013 tournament. With rivalry at its height since England’s demolition of their opponents in the last match of 2011, which was won in decisive fashion by an innings and 83 runs and marked England’s first victory in Australia for 24 years, the tournament promises to reignite the spirit and passion that make it one of the game’s most prolific contests.